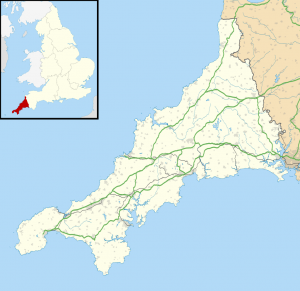 Newquay is a town, civil parish, seaside resort and fishing port in Cornwall, England. It is situated on the North Atlantic coast of Cornwall approximately 20 miles (32 km) west of Bodmin and 12 miles (19 km) north of Truro. The town is bounded to the west by the River Gannel and its associated salt marsh, and to the east by the Porth Valley. Newquay has been expanding inland (south) since it was founded. In 2001, the census recorded a permanent population of 19,562

As with the rest of the British Isles and South West England, Newquay experiences a maritime climate with cool summers and mild winters. The nearest Met Office weather station is St. Mawgan/Newquay Airport, about 3.5 miles to the north east of the town centre. Temperature extremes in the area since 1960 vary from 31.3 °C (88.3 °F) in June 1976 and August 1995 down to −9.0 °C (15.8 °F) during January 1987. 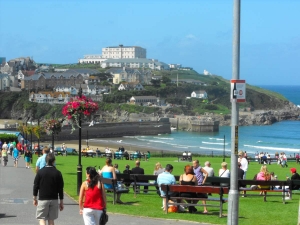 Newquay has been a major tourist destination for more than a century, principally on account of its coastline and nine long and accessible sandy beaches, including Fistral. Around 22,000 people live in Newquay nowadays, but the population can increase to 100,000 or more in the summer because Newquay has a large stock of holiday accommodation.

Established in sections throughout the 20th century, Trenance Leisure Gardens are sited in a wooded, formerly marshy valley on the quieter edge of Newquay, stretching down to the Gannel Estuary. From the Edwardian era it provided recreation for tourists with walks, tennis courts and a bowling green, all still popular today. In the gardens, which are spanned by the arches of the stone railway viaduct, visitors have long been able to enjoy a stroll through the beautiful Trenance Gardens with their mature trees and heritage cottages, leading to the boating lake. This was dug during the depression of the 1930s as a work creation scheme. In the late 1960s, further enterprises were established by the council, including mini-golf, a swimming pool, the “Little Western” miniature railway and Newquay Zoo, which opened in 1969.

There are lots of attractions in Newquay; most of all the lovely beaches, some of which are used for musical events, fast speedboat events and surfing competitions, but there’s room for everybody. Close to most beaches there are restaurants, cafes and toilets close by, due to their proximity to the town, and the most popular will have a lifeguard.

The resort is widely regarded as the surf capital of the UK. Newquay is a centre for the surf industry in Britain, with many surf stores, board manufacturers and hire shops in the town.

At the centre of Newquay’s surfing status is Fistral Beach which has a reputation as one of the best beach breaks in Cornwall. Fistral is capable of producing powerful, hollow waves and holding a good sized swell.

Newquay is also home to the reef known as the Cribbar. With waves breaking at up to 20 feet (6 m), the Cribbar was until recently rarely surfed as it requires no wind and huge swell to break. It was first surfed in September 1965 by Rodney Sumpter Bob Head and Jack Lydgate then again in 1966 by Pete Russell, Ric Friar and Johnny McElroy and American Jack Lydgate. The recent explosion in interest in surfing large waves has seen it surfed more frequently by South African born Chris Bertish, who during a succession of huge clean swells in 2004 surfed the biggest wave ever seen there.

Towan, Great Western and Tolcarne beaches nearer the town and nearby Crantock and Watergate Bay also provide high quality breaks. Towan Beach is the location for the proposed Newquay Surfing Reef, a controversial project which has caused a fierce local debate

Other attractions suitable for evening entertainment are the local Lighthouse Cinema that has four screens, six nightclubs in the town and numerous pubs. Several country pubs, well worth a visit, are within a few minutes’ drive of the resort. If the weather is too poor for the beach there are many other attractions further afield, such as the aircraft museum on the south side of Newquay Airport, or the Dairy Farm just outside Newquay. A good place for information on Events is to check out the Tourist Office. 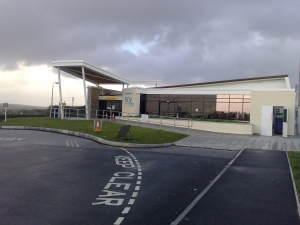 Newquay railway station is the terminus of the Atlantic Coast Line from Par. The railway was originally built as a mineral line in the 1840s to provide a link with the harbour. A passenger service followed on 20 June 1876, and from then on the town developed quickly as a resort. The station is close to the beaches on the east side of the town centre.

Newquay handles intercity trains throughout the summer, which include a daily service to and from London in July and August and also further through trains to London, the Midlands and North on Saturdays and Sundays between May and September. It is the only branch line terminus in Britain still handling scheduled intercity trains.

Cornwall Airport Newquay provides links to many other parts of the United Kingdom. It is an HM Customs port, because it also handles increasing numbers of foreign flights, both scheduled and chartered. Newquay (NQY) is the principal airport for Cornwall, although there are several minor airfields elsewhere in the county.

National Express runs coaches from various parts of Great Britain to Newquay. Newquay has a good local bus network: the principal operator is Western Greyhound, but some services are provided by FirstGroup and Summercourt Travel. The bus station is in Manor Road, which runs parallel to the main shopping area of Bank Street.

Thanks to Wikipedia for the article